Name of the College:

Name and Address of Affiliating University:

Date of constitution of Anti-Ragging committee:

The Anti-ragging committee was constituted in 2007, and later modified and reconstituted every year

The squad members are made in charge for monitoring each floor. They Regularly take rounds of the floor three to four times in a day, Especially during lunch hours. During the course of the rounds they also conduct surprise raids in the canteen area which may number 3 to 4 raids in a week.

Monitoring Cells have been constituted one each for Canteen area, Parking Area and Sports ground.

The direction as provisioned under clause 11(a) of the regulation have been incorporated in the application form for admission. However, advertisement for admission is issued by the EAMCET convener and not the college.

Receipts of affidavit from the students and parents as envisaged under the regulation.

At the time of admission the college is collecting affidavit from the students and parents as envisaged under the anti-ragging regulation.

2.UGC Draft Regulations on Curbing the Menace of Ragging in Higher Educational Institutions, 2009(20/04/09)

4.Report of the Committee to Curb the Menace of Ragging in Universities/Educational Institutions-1999.

5.Report of the Committee on Ragging Constituted by the Hon'ble Supreme Court of India - Menace of Ragging in Educational Institutions and Measures to Curb it.

6.Supreme Court of India Orders - Curbing Ragging in Educational Institutions - Inclusion of No. of Ragging Incidents in Prospectus/Brochures. 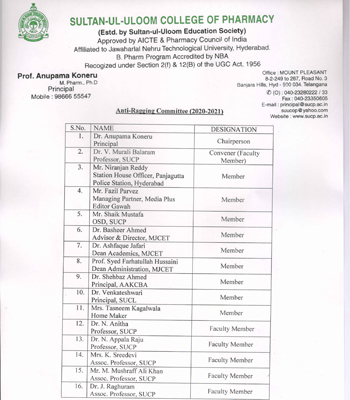